Read on as we discuss the unique features of the Fujifilm Instax Mini instant film and where to get your hands on it!

The Fujifilm Instax Mini film compatible with the Mini 9 is available online and at various stores. The quickest and easiest way to buy the Instax Mini instant film is to source it online through Amazon. Here are two reliable options (with varying price points) to get the mini-film pack with 60 and 20 exposures. 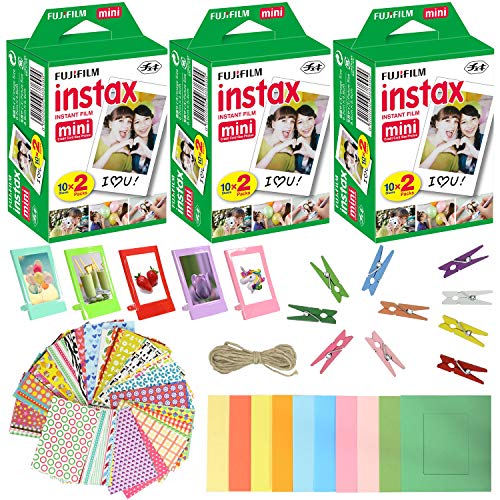 The Fujifilm Instax Mini instant film is available in twin packs, where you get 20 exposures (10 exposures per pack). Buying the Instax Mini film in bulk allows you to save money.

Individual twin packs are usually pricier by a few dollars.

The 60 pack listing on Amazon has fantastic value for money since it comes with three twin packs of Instax film, allowing you to take 60 images. The pictures are small enough (the size of a baseball card) to fit into a purse or wallet quickly.

The frames and stickers make it a fun gift for Mini 9 owners.

The film worked great for 86% of users, who gave it 5-tar reviews. The film has good grain quality and true colors that do not bleed into each other. Although the Mini 9’s low shutter speed (1/60 sec.) may contribute to the pictures being too bright when taken outdoors.

Some reviews claimed the pictures came out blank or too dark.

However, that has more to do with the film handling than its quality. This light-sensitive film can have dark streaks or become completely white if exposed to sunlight or heat.

Although, since the bundle has 60 films, if used after a long time or at too cold a temperature, the resulting images may be too dark.

If the dark pictures are only a result of low lighting, you can turn on the Hi-Key Mode on the Mini 9 Instax camera to brighten the final photo.

Overall, this is an excellent film option for the Mini 9 camera, which comes with attractive frames to add more fun to your photos. 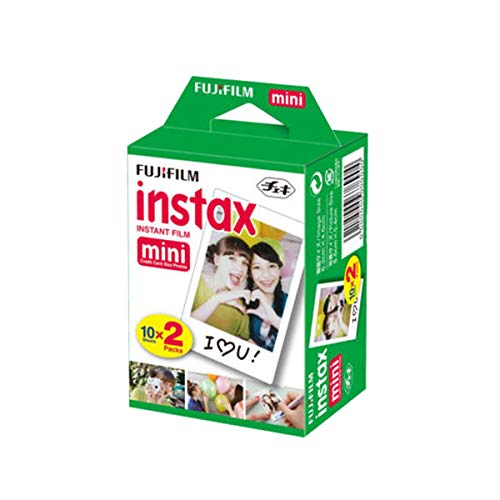 Thanks to the Instax Mini cameras and film popularity, there are numerous online listings for the Mini film, especially in twin packs (two x one roll with ten images each). However, this particular film listing has a whopping 86% 5-star ratings from over 20 thousand reviews.

The twin pack is a good choice when you start with instant photography and do not want to buy film in bulk. Although, it will cost you slightly more. Thus, you should consider the running cost of film over time if you own the Mini 9 camera yourself.

However, instant film does not get much better than this for image quality.

The Instax film not only has true colors, but it also develops quickly (in less than two minutes), so you have instant memories. With the Instax film, there is no need for printing ink. All you need to do is load the film cartridge and click the shutter button to take instant photos.

The mini size of the film can be a deal-breaker for some. However, it makes the resulting images much more portable and easier to hand out at parties.

While using the Instax film is pretty straightforward, you need to be careful with its handling. Some customers complained about the photos coming out black, which can be for a multitude of reasons:

The only downside of buying a twin pack is how quickly you can go through a film cartridge.

However, quality and price-wise, this is an excellent Instax film option for all the Mini cameras, including the Mini 9. The photos are easy to take and work great as souvenirs because of their small size.

The Instax Mini camera film is compatible with the highly successful Mini line of instant cameras from Fujifilm.

Its various features make the final photos much sharper and more authentic than ZINK alternatives. Here’s what makes the Mini Instax film stand out.

Even though this is an ISO 800 film, the grain quality is surprisingly excellent – the mini print also becomes a contributing factor here. The colors are bright, and the subject comes out defined, as there is no interlayer dye mixing. Fujifilm has also used development accelerators, giving this mini-film a fast developing time of 90 seconds.

Usually, with instant films, the extreme temperature can cause dark streaks or completely whiten the resulting picture. However, with the Mini instant film, the extended temperature range of 5 to 40 degrees Celsius makes it less susceptible to such issues.

Fujifilm has also used a development-control technology to ensure the film’s raw stock does not deviate much in quality over time.

Fujifilm also uses single-plastic composition, making it easier to dispose of the film.

How to Put Film in the Instax Mini 9 Camera

Once you have purchased the Mini film on hand, the next step is to load it into the Mini 9 to start taking photos. Here is how you can do so in a few simple steps.

Step #1: Take the Cartridge Out of the Pack

Film cartridges are individually packed. Take one out of the box and use the tear mark at the top to take it out. Make sure not to do this under direct sunlight. Ensure you are not putting excessive pressure on the cartridge.

Step #2: Align the Yellow Markers on film and Mini 9

Open the film compartment at the back of the Mini 9. You will see a yellow marker on the cartridge and the compartment. Place the film in so that the two yellow dots line up.

Close the film compartment as soon as possible. The film confirmation window will be yellow, indicating the film is safely inside the Mini 9.

The film counter will have the sign “S” present, which shows that the dark protective slide is still in place. So, before you take the first picture, press the lens release button to turn on the camera. Now, press the shutter button once to eject the film cover.

Once the cover is out, you can start shooting with the Mini 9.

Here is some more quick information regarding the Mini 9 and its film.

What film does the Instax Mini 9 use?

The Instax Mini 9 uses the Fujifilm Instax MINI instant film. Each film pack contains ten exposures which means that you can use it to take ten photos. The Mini 9 uses two AA batteries suitable for approximately ten film packs or 100 shots.

According to the Fujifilm United States website, the Instax Mini 9 is discontinued. However, you can still find it online and in-store, using the “Where To Buy” option on the particular site page.

It is also available on Amazon. The Mini 9 was replaced by the Mini 11, as the beginner Mini camera of the line.

How much does the film cost for Instax Mini 9?

The Instax mini instant film used for the Mini 9 camera costs anywhere between $6 to $8 for a single pack of 10 exposures. However, the price can be higher. The mini-film initially cost around $10 (10 cents per shot), but the price has gone down a little in recent times.

Buying the film in bulk can significantly decrease the instant film’s running cost. However, for different frames, the price changes by design.

How do I refill my Instax Mini 9 film?

Once you have used up the film cartridge, the film counter at the back of the Mini 9 will display “0,” which means you can load a new film pack without exposing any left shots. To refill the Mini 9:

Your Mini 9 is refilled and ready to use.

The Mini 9 uses the widely available and popular Instax Mini instant film, where each pack has ten exposures. You can buy the film in a singular pack of 10 shots or go for a twin pack with two film cartridges (20 prints). However, buying the film in larger quantities, like 60 exposures or more, can bring down the cost significantly. Once the film pack designed for a Polaroid camera is opened, the only safe place to store the film is in the camera. It can last up to 8 weeks before expiring.