The mini instant film by Fujifilm is an ISO 800 integral daylight color film with a glossy finish, which works with various other Instax Mini cameras (even the newer models), including the Mini 7s.

Read on as we review the Instax Mini instant film, focusing on its results, usage, price point, and precisely what sets it apart from its competitors.

Over the years, the Mini film compatible with the 7s and various Instax Mini cameras has made quite a name for itself for its vibrant, authentic colors, quick developing time, and budget-friendly price tag versus similar quality competitors.

The Instax Mini 7s instant mini film is usually available in a twin pack with two film cartridges, with ten exposures each. 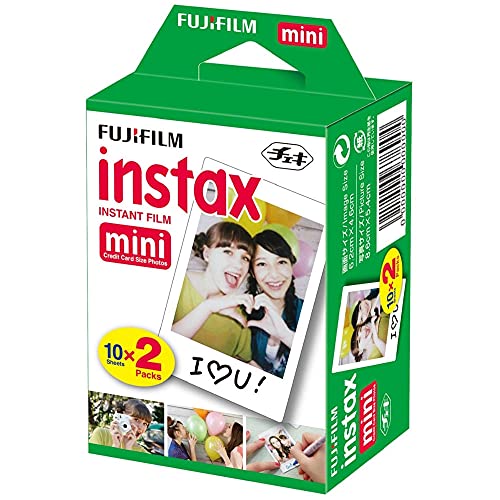 All in all, you get 20 shots in a Mini film twin pack. Each white frame film pack usually costs around $10, at almost $1 per shot. However, you can find better cost listings for the Instax 7s mini film on Amazon, for the twin pack. (With 86% of 5-star reviews, users claim the film worked just as well as other pricier listings.)

The film makes for lovely mementos that fit right into your wallet. But is the Instax Mini film for the Mini 7s instant camera worth the money?

The Mini film is 86 x 54 mm, making it the perfect size to carry inside purses and wallets. Although smaller than your typical polaroid camera film (the Instax square film is closer in size to that), the Fujifilm Instax Mini film comes with a lighter price tag.

The image size is smaller than the film size at 62 x 46 mm, owing to the white frame and a wider border at the bottom, which you can use to write a message or the date (use a non-water-based ink pen).

The extended frame at the bottom of the image makes the Mini film an excellent choice for archival purposes and documentation, especially since it is easy to carry around.

The number of Prints Per Film Pack

Each mini film cartridge contains ten exposures, which means that you can use each film pack to take ten photos.

After the container is empty, the film counter in the Mini 7s instant camera displays “0.” This is an indication to load a new cartridge in the film compartment.

The Fujifilm Instax Mini film has a glossy finish, presenting true and vibrant colors with natural tones in electronic flash and natural light. The effective flash range for the Instax Mini 7s is between 0.6 to 2.7 m.

Fujifilm is synonymous with excellent film quality, and the Mini Film for the 7s Mini instant camera is no different with some great features.

The Fujifilm Instax Mini film produces fantastic grain quality, despite being a high-speed ISO 800 film. Since it has a higher ISO value, the Mini film results in vibrant pictures indoors and outdoors.

However, since the Mini 7s has a shutter speed of 1/60 seconds, it can cause images to return overexposed in bright sunlight.

Although, you can manually choose between four exposure settings on the 7s point-and-shoot camera, which comes with an LED light in the exposure meter.

The Mini film uses technology that allows the faster acid transfer and prevents interlayer mixing; thus, the resulting photos are sharp and have vivid details.

With a resolution of 12 lines/mm, the image quality is good and holds its own compared to traditional films.

One problem with the film is how sensitive it is to light and, thus, more susceptible to damage. In other words, you spoil the film cartridge without ever getting to use it.

Moreover, the Fujifilm Instax Mini film uses new development control and emulsion technology to resist any changes in the raw stock that may present with age.

You still need to keep the film out of direct sunlight and be careful when exposing it to brightness. You also cannot open the film compartment on the Mini 7s once the film cover is off, or the resulting pictures will be white.

Other Compatible Instant Cameras and Printers

The good news about the mini film is that it is compatible with various other instant cameras and Instax printers.

Thus, if you invest in more than one camera from the Mini line or go for one of the compatible printers, the Mini instant film will be useful in all such devices.

Some hybrid camera and printer options also allow you to select one from a video and print it on the film.

The Mini film is easy to use (more on that later) and of excellent quality, but there are a few things you need to consider.

One way of avoiding the running cost of mini film cartridges is to buy more film packs in one go. Instead of the twin pack with 20 shots, go for the 5-pack bundle, which allows you to shoot 50 photos. 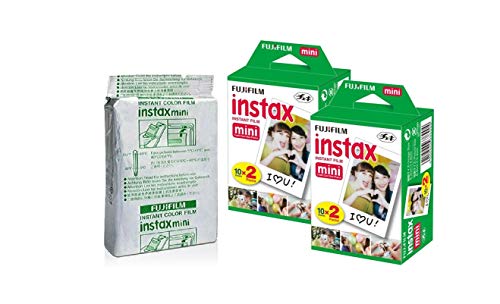 In the 5-pack bundle, you will receive two twin packs, of 20 images each and one individual film cartridge in bulk packaging, at the discounted rate of $36.50 (at the time of writing), compared to the usual $60 value.

Although the bestseller 5-pack bundle has an 87% 5-star rating, storing the film for too long can cause dark streaks due to temperature changes. Get the 50 sheets if you can use them as soon as possible.

How To Put In The 7s Instax Mini Instant Film

Using the mini film is extremely simple, and you only have to follow a few simple steps, from putting in new batteries to getting a developed image.

What film does Instax Mini 7s use?

Does the Instax Mini 7 and 9 use the same film?

The Mini 7 and Mini 9 use the same Fujifilm Instax Mini instant film. All other instant camera offerings from the Fujifilm Mini line use the same film, including the Mini 40, Mini 7s, Mini 70, Mini 90, and hybrid mini camera models.

Polaroid Zink Paper is not compatible with Instax Mini 7s or any Instax camera from the Mini line. To use the Mini 7s camera, you must load the Fujifilm Instax Mini film on the camera’s back cover. Each pack contains ten exposures, allowing you to take ten photos. Fujifilm recommends only using the Instax mini instant film in its Mini instant cameras.

The only differences between the Instax Mini 7+ and the 7s are different sensor placement and a new coral color in the Mini 7+. The 7+ line has replaced the white color from the Mini 7s; the rest of the four colors remain the same.

Both cameras have the exact specifications and features, with the Mini 7+ being the newer model. There is a slight difference in the lens barrel shape of the two models, but the overall bulbous and fun exterior remains the same. In simple words, the Mini 7+ is a repackaged 7s.

The Mini 7s uses the Fujifilm Instax mini film, which is compatible with all the mini line instant cameras. The film is easy-to-use, quick to develop, and produces vivid images – perfect for capturing precious memories on the go. Given that the Instax Wide Film savings are minimal between the 20 and 100 sheets I recommend buying 20 sheets unless you know you will be taking a lot of photos. Read on as we discuss the unique features of the Fujifilm Instax Mini 9 instant film and where to buy. We recommend buying the 20 or 60 sheets for best value!