As an Amazon Associate I earn from qualifying purchases.

Fujifilm’s Instax series has cult status for its build quality and ease of use.

Continuing this trend is one of the mid-range offerings of Fujifilm’s popular series, the Instax Mini 70.

This handy little device was released towards the tail end of 2015 and since then has been made available in a plethora of colors, including moon white, midnight black, island blue, stardust gold, passion red, and canary yellow.

In this article, we shall conduct a deep dive into this device’s specifications and features in order to see whether it passes the mark as your next instant camera.

The first thing anyone notices when they grab a camera is its build quality.

This is an important characteristic as it not only signals the quality you can expect from the rest of the device but, moreover, a sturdy frame adds to the device’s ability to withstand unintentional drops and incidental scruffs.

Fortunately, the Instax Mini 70 scores highly in this regard, thanks to a few key characteristics in design.

One of the most standout aspects of this camera’s appearance is the distinctive metal sheen that covers the body of the device.

Thanks to this addition, the camera has a premium feel that one would be more likely to see in higher-end devices.

The metallic finish does wonders when it comes to making the colors of the device pop out.

The bold design choices do not end there.

In a departure from the standard design language of the Instax series, Fujifilm has opted to give this device rather strong and aggressive angles, which give it a more professional look than other devices in the lineup.

One thing to note, however, is the fact that despite the metallic finish and the premium design language, it still has a plastic body.

Due to this, it would be wise to be careful while handling it, as a drop may potentially lead to some damage to the device.

If, however, you anticipate using the camera in environments where it may get scratched or dropped, you can do a couple of things to help reduce the likelihood of damage occurring.

One thing we recommend is using a camera strap while holding the device so that a drop is not fatal.

An even better course of action would be to purchase a camera case such as this one.

This will not only provide a safe spot to store the camera but, additionally, it will help prevent damage in the case of a drop or strong shock to the frame of the device.

Hence you will be able to overcome the fact that it has a plastic build.

Finally, an important feature of any consumer camera is its portability.

After all, it is not feasible to have a dedicated camera bag everywhere you go; hence your device needs to be easy to store and carry.

In this regard, the Mini 70 holds its own.

Weighing slightly above a quarter of a kilogram, this device will not be the best fit for your pocket.

However, it is still small and light enough to be carried in your backpack, handbag, or hand for prolonged periods of time.

Like most Instax cameras, the Mini 70 is relatively simple to operate with a clean user interface that is easy to get accustomed to.

On the back, you will find a small LCD display that will show you most of the crucial information regarding the mode setting of the camera.

There are three buttons labeled ‘Selfie,’ ‘Mode,’ and ‘Timer’ that help you adjust the device’s configuration.

The ‘Timer’ and ‘Selfie’ buttons can be used to set a timer or shift into selfie mode, respectively.

The third button, ‘mode,’ is used to change between the various modes available on the device.

It has four modes that can each be used depending on the circumstance.

In the case that the user selects none of the available modes, the camera reverts to a default normal mode that focuses on targets between 60 centimeters and 3 meters.

Flash and shutter settings will be handled on the fly by the automatic exposure control, depending upon the conditions when the picture is being taken.

One of the most thoughtful features of this camera is the inclusion of a small mirror placed towards the left of the lens, which can be used to help yourself curate selfies.

Additionally, another thing to note is that the lens itself is a retractable, or pop-out, design.

This essentially means that the lens extends out of the camera’s main body when the device is turned on and retreats back into the device when it is turned off.

Another important characteristic to keep in mind before purchasing a camera is its shutter speed.

The camera itself will select between a range of options available to it, depending on light conditions and the mode selected by the user.

In poor light conditions, it may opt to use a comparatively sluggish shutter speed of half a second.

On the flip side, under ideal conditions, the exposure may even be as short as one four-hundredth of a second.

Unlike some cameras, which can have a variable aperture, the aperture is fixed and set at f/12.7.

Thus the job of controlling how much light enters the image falls squarely on the shutter speed.

Finally, and perhaps most importantly, is the subject of taking and developing the images.

The top side of the camera has an ejection slot through which your newly minted polaroids will exit.

One press of the shutter corresponds with one image being printed by the camera.

When a picture is taken, the polaroid starts to exit the device slowly.

During this process, the image itself also starts developing in the mini film.

Ultimately, this entire process, from pressing on the shutter to getting the final image, tends to take a minute or two.

Alternative Options on the Market

The Instax Mini 70 has a series of competitors on the market vying for the spot in your backpack.

In the next section, we will look at a couple of these offerings and see how their specifications and quality square up. 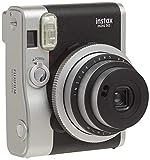 Generally, the mini 90 is a slightly higher-end offering than the mini 70, and due to this, it has a few features that the other device does not.

The first of these features is the addition of an extra mode within the camera itself, labeled as the ‘kids mode.’

This mode is best suited to taking images of objects that are moving rapidly and thus require a short exposure for the image to avoid blurriness.

Despite the addition of this feature, however, the Instax 70 is still able to perform all the same functions as the Instax 90, including images with short exposures.

The Instax mini 90 and 70 also both have wildly different design languages and theories.

While the Instax mini 90 is two-toned and has a retro vibe reminiscent of the previous century, the 70 comes with a sleek and modern finish, more fitting for the 21st century.

Fundamentally, however, these criteria are highly subjective, and which camera looks better will vary from person to person depending on their preferences and the aesthetic they like having.

Thus, overall it can be concluded that although the mini 90 does attempt to offer some additional features over the 70, it is still largely a similar device with similar features and capability across the board.

The mini 9 is a lower-end offering to the mini 70, and this is reflected in its suite of features as well.

One of the most crucial differences is the fact that the mini 9 has a fixed shutter speed that always remains the same irrespective of light conditions at one-sixtieth of a second.

This has the potential of causing issues on the extreme ends of the spectrum when there is either a low light circumstance or when the subject of the picture is moving.

Another important distinction is the fact that the mini 9’s flash always fires no matter the circumstance.

Although this is not a huge issue, considering the fact that in most cases, you are going to be using the flash anyway, it still has its downsides.

What if you wanted to turn off flash on the Instax Mini 9?

The most striking visual difference between the two cameras is their respective design languages.

While the mini 70 is sleek and modern, the mini 9 seeks to be bubbly and fun.

Thanks to pastel colors and rounded design with soft edges, the mini 9 has a significantly different vibe to it.

Much like the last comparison, however, looks are a largely subjective matter, and you may prefer either.

Hence, it can be noted that although the mini 9 will get the job done decently at a lower price, most users will benefit strongly from the additional features and options available in the mini 70.

How to turn the flash off Instax mini 70? Unfortunately, the mini 70 has no dedicated option or setting to turn off the flash completely.

Instead, the device senses the light in the environment and decides whether or not to use the flash accordingly. Hence if you were to take perhaps a landscape picture out on a sunny day, it is likely that the flash will not fire.

What film goes into the Instax Mini 70? The only type of mini film you can use in the Instax mini 70 is the custom Fujifilm’s, designed for this polaroid model.

This can be bought in cartridges of 10 or in bulk.
Moreover, its color temperature is 5500 K, and it has a speed of around ISO 800.

Finally, it is worth noting that the film’s dimensions themselves are 6.2 cm by 4.6 cm, making it roughly similar in size to the standard business card.

Although both higher and lower-end options are available, depending on your budgets, such as the mini 9 and mini 90, the Instax mini 70 seems to occupy a sweet spot in terms of its price to performance.

In this camera, you get a solid polaroid taker with multiple modes that can help you gear it to most situations, whether they be low-light, action-paced, or outdoors.

The sleek modern design is almost sure to turn some heads when you pull it out at a party or gathering.

Though the addition of a few features (such as the option to turn off flash) could be desirable, the Instax Mini 70 is still a great option for the price overall. 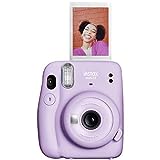 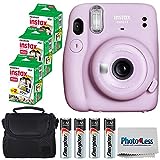